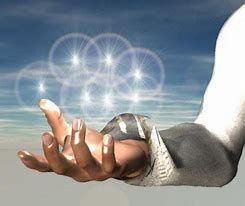 Last night during the service, Jesus came and stood up front on the platform and He wore a living robe. It looked like a flexible movie screen with living images of clouds flowing on the robe.
As i watched, I then saw Jesus smile, and He opened His robe, and the inside of the robe had another living screen playing with different images flowing on it. The images inside was of multitudes of stars shining in the sky.
The Lord took off one star and held it in his hands. Then He began to touch each star on His robe inside and the stars left the screen and joined the star in His hand, and H did this until all of the stars on the screen in the sky were no more, but the stars were now all in His hands.
Then Jesus looked at everyone in the meeting and then He raised His hands and threw all of the stars into the air, and they were all suspended above the people. Each star was shining brightly, and were no longer in His robe, but were now released into the region.
The stars are those people that each person is called to reach. When they were all still in the folds of Jesus robe, they were still waiting to be activated for the harvest. But now, the souls are going to be harvested.
The people in the meeting represent the saints that are now to step out into their inheritance, and its time to reap those you are called to. The Lord is ready for you all to now stretch out your hands, and reach those who God sends to you, for they are now ready.

Genesis 22:15 The Angel of the Lord called to Abraham from heaven a second time 16 And said, I have sworn by Myself, says the Lord, that since you have done this and have not withheld [from Me] or begrudged [giving Me] your son, your only son, 17 In blessing I will bless you and in multiplying I will multiply your descendants like the stars of the heavens and like the sand on the seashore. And your Seed (Heir) will possess the gate of His enemies, 18 And in your Seed [Christ] shall all the nations of the earth be blessed and [by Him] bless themselves, because you have heard and obeyed My voice.