Today, as we were driving to the Healing Rooms to minister to those who needed prayer for healing, I saw a vision. While we were in the car, I saw a cloud in the spirit come near and hover right in front of me. It then changed it's shape and took on the form of a garment. Then it came upon me and went into my being. I could feel it like a garment on me. It was thick, but light. It felt like a mist. It was living. i could feel the life flowing in it, through me. The Presence of God was strong.

Later, I told Pat of the experience. He reminded me that it was like the Angel of the Lord who was clothed in the cloud in Revelations 10:1. The Lord keeps telling us in many different ways, that we are living in the fulfillment of this verse in our lives. God is calling us to eat His Book, and the Climb our scrolls, and to be clothed as He is clothed, and to walk as He walks, while we live it out in the earth.

It is time for a fresh word of Prophecy to come from the mouths of God's People in this hour. A Word they will get from Gods mouth, and then they will go and feed the peoples.

Revelations 10:
1THEN I saw another mighty angel coming down from heaven, robed in a cloud, with a [halo like a] rainbow over his head; his face was like the sun, and his feet (legs) were like columns of fire.
2He had a little book (scroll) open in his hand. He set his right foot on the sea and his left foot on the land,
3And he shouted with a loud voice like the roaring of a lion; and when he had shouted, the seven thunders gave voice and uttered their message in distinct words.
4And when the seven thunders had spoken (sounded), I was going to write [it down], but I heard a voice from heaven saying, Seal up what the seven thunders have said! Do not write it down!
5Then the [mighty] angel whom I had seen stationed on sea and land raised his right hand to heaven (the sky),
6And swore in the name of (by) Him Who lives forever and ever, Who created the heavens (sky) and all they contain, and the earth and all that it contains, and the sea and all that it contains. [He swore] that no more time should intervene and there should be no more waiting or delay,
7But that when the days come when the trumpet call of the seventh angel is about to be sounded, then God's mystery (His secret design, His hidden purpose), as He had announced the glad tidings to His servants the prophets, should be fulfilled (accomplished, completed).
8Then the voice that I heard from heaven spoke again to me, saying, Go and take the little book (scroll) which is open on the hand of the angel who is standing on the sea and on the land.
9So I went up to the angel and asked him to give me the little book. And he said to me, Take it and eat it. It will embitter your stomach, though in your mouth it will be as sweet as honey.
10So I took the little book from the angel's hand and ate and swallowed it; it was as sweet as honey in my mouth, but once I had swallowed it, my stomach was embittered.
11Then they said to me, You are to make a fresh prophecy concerning many peoples and races and nations and languages and kings. 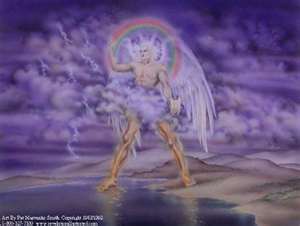 Posted by revsusanthebrave at 10:14 PM

The Unrolling Scrolls Descending From Above

The Unrolling Scrolls Descending From Above