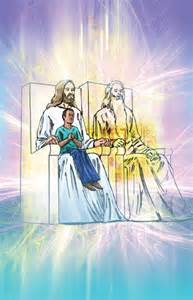 The link to the podcast is found at:

We have now crossed through a two month turbulent time period, which began with December in the ending month of 2015 and ended with January in the beginning month of 2016. The turbulence was the shifting of natural and spiritual realities that are necessary to bring forth the full Jubilee Inheritance that is due to the righteous this year.

The old, the barren, the broken, the forsaken, and the lost have all been accounted for in the heavenly and earthly accounting, and the needed transactions are being released now in the month of February. The decisions have been made, and the heavenly distributions shall come to bring forth the redemption process for fulfillment.

There shall be a settling down and a smoothing out in this month of February for those who have patiently positioned themselves to inherit their promises in the midst of extreme pressures and hardships. The turbulence shall become the very catalyst to bring forth the fuller expression of Jubilee in your lives this year.

Those who are positioned with their bowls- their faith-filled expectation of hope- shall not be disappointed. That which has been longed for shall indeed come, and He whom they have waited upon shall begin to be manifested within them. The set time of prophetic fulfillment has come, and the time of manifestation has begun.

Jesus Christ triumphed over all of the powers of death, hell, and the grave, and He also owns the keys! His Light shall also shatter the opposing works and forces of darkness that have been arrayed against you. Just as Life defeated the forces of hell when Jesus was resurrected, so shall Liberty break every restraint in your life.

Great Grace is fully flowing this month, and this will also be the very catalyst upon which you will move into new strata’s of faith and into the higher realms of Glory. A full Jubilee has been decreed for the righteous, and the righteous will take it by faith and force. It is time to exercise your God given mandates, and to multiply fruitfully!

Zechariah 4:1 And the angel who talked with me came again and awakened me, like a man who is wakened out of his sleep. 2 And said to me, What do you see? I said, I see, and behold, a lampstand all of gold, with its bowl [for oil] on the top of it and its seven lamps on it, and [there are] seven pipes to each of the seven lamps which are upon the top of it. 3 And there are two olive trees by it, one upon the right side of the bowl and the other upon the left side of it [feeding it continuously with oil]. 4 So I asked the angel who talked with me, What are these, my lord? 5 Then the angel who talked with me answered me, Do you not know what these are? And I said, No, my lord. 6 Then he said to me, This [addition of the bowl to the candlestick, causing it to yield a ceaseless supply of oil from the olive trees] is the word of the Lord to Zerubbabel, saying, Not by might, nor by power, but by My Spirit [of Whom the oil is a symbol], says the Lord of hosts. 7 For who are you, O great mountain [of human obstacles]? Before Zerubbabel [who with Joshua had led the return of the exiles from Babylon and was undertaking the rebuilding of the temple, before him] you shall become a plain [a mere [molehill]! And he shall bring forth the finishing gable stone [of the new temple] with loud shoutings of the people, crying, Grace, grace to it!

Acts 4:32 Now the company of believers was of one heart and soul, and not one of them claimed that anything which he possessed was [exclusively] his own, but everything they had was in common and for the use of all. 33 And with great strength and ability and power the apostles delivered their testimony to the resurrection of the Lord Jesus, and great grace (loving-kindness and favor and goodwill) rested richly upon them all. 34 Nor was there a destitute or needy person among them, for as many as were owners of lands or houses proceeded to sell them, and one by one they brought (gave back) the amount received from the sales 35 And laid it at the feet of the apostles (special messengers). Then distribution was made according as anyone had need.

The sign of the 5 aligning planets in the heavens: 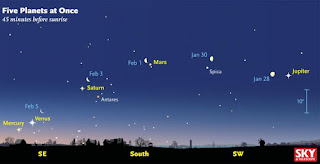 February mornings feature Mercury, Venus, Saturn Mars and Jupiter lined up across the sky. The last time this five-planet dawn lineup happened was in 2005. The planets are easy to distinguish when you use the moon as your guide. Look for reddish Mars near the moon in the early morning of February first. Then, on the third, the moon passes near butterscotch-hued Saturn. On the sixth the moon, Mercury and Venus make a pretty triangle before sunrise. Then it's Jupiter's turn to pose with the moon on the 23rd. Through a telescope, Jupiter's pale yellow is transformed into bands of cream, ochre and tan. Finally, the moon passes Mars again on Leap Day, February 29th.

In case you miss the string of planetary pearls this month, you can see all five planets again in August's sunset sky, though Venus and Mercury will be very close to the horizon for Northern Hemisphere observers. Last month comet Catalina's curved dust tail and straight ion tail were visible in binoculars and telescopes near two galaxies that are close to the handle of the Big Dipper.

Early this month, the comet nears Polaris, the North Star. It should be visible all month long for Northern Hemisphere observers. There will be more opportunities to photograph comet Catalina paired with other objects this month. It passes the faint spiral galaxy IC 342 and a pretty planetary nebula named NGC 1501 between February 10th and the 29th. For binoculars viewers, the magnitude-6 comet pairs up with a pretty string of stars known as Kemble's Cascade on February 24th.

Finally, through binoculars you should be able to pick out Vesta and Uranus near one another this month. You can use the moon as a guide on the 12th and the corner stars of Pegasus all month long.

The sign of Hosea Chapter 2 in the month of February:

Hosea Chapter 2 also beautifully depicts the transition from December 2015 into January 2016, a sign of the culminating in the heavens and the earth joining into agreement in the month of February to release a full Jubilee for God’s people.

Hosea 2   Amplified Bible, Classic Edition (AMPC)
1 [Hosea], say to your brethren, Ammi [or You-are-my-people], and to your sisters, Ruhamah [or You-have-been-pitied-and-have-obtained-mercy]. 2 Plead with your mother [your nation]; plead, for she is not My wife and I am not her Husband; [plead] that she put away her [marks of] harlotry from her face and her adulteries from between her breasts, 3 Lest I strip her naked and make her as in the day she was born, and make her as a wilderness and set her like a parched land and slay her with thirst. 4 Yes, for her children I will have no love nor pity nor mercy, for they are the children of harlotry. 5 For their mother has played the harlot; she who conceived them has done shamefully, for she said, I will go after my lovers that give me my food and my water, my wool and my flax, my oil and my refreshing drinks. 6 Therefore, behold, I [the Lord God] will hedge up her way [even yours, O Israel] with thorns; and I will build a wall against her that she shall not find her paths. 7 And she shall follow after her lovers but she shall not overtake them; and she shall seek them [inquiring for and requiring them], but shall not find them. Then shall she say, Let me go and return to my first husband, for then was it better with me than now. 8 For she has not noticed, understood, or realized that it was I [the Lord God] Who gave her the grain and the new wine and the fresh oil, and Who lavished upon her silver and gold which they used for Baal and made into his image. 9 Therefore will I return and take back My grain in the time for it and My new wine in the season for it, and will pluck away and recover My wool and My flax which were to cover her [Israel’s] nakedness. 10 And now will I uncover her lewdness and her shame in the sight of her lovers, and no one shall rescue her out of My hand. 11 I will also cause to cease all her mirth, her feastmaking, her New Moons, her Sabbaths, and all her solemn feasts and appointed festive assemblies. 12 And I will lay waste and destroy her vines and her fig trees of which she has said, These are my reward or loose woman’s hire that my lovers have given me; and I will make [her plantations] an inaccessible forest, and the wild beasts of the open country shall eat them. 13 And I will visit [punishment] upon her for the feast days of the Baals, when she burned incense to them and decked herself with her earrings and nose rings and her jewelry and went after her lovers and forgot Me, says the Lord. 14 Therefore, behold, I will allure her [Israel] and bring her into the wilderness, and I will speak tenderly and to her heart. 15 There I will give her her vineyards and make the Valley of Achor [troubling] to be for her a door of hope and expectation. And she shall sing there and respond as in the days of her youth and as at the time when she came up out of the land of Egypt. 16 And it shall be in that day, says the Lord, that you will call Me Ishi [my Husband], and you shall no more call Me Baali [my Baal]. 17 For I will take away the names of Baalim [the Baals] out of her mouth, and they shall no more be mentioned or seriously remembered by their name. 18 And in that day will I make a covenant for Israel with the living creatures of the open country and with the birds of the heavens and with the creeping things of the ground. And I will break the bow and the sword and [abolish battle equipment and] conflict out of the land and will make you lie down safely. 19 And I will betroth you to Me forever; yes, I will betroth you to Me in righteousness and justice, in steadfast love, and in mercy. 20 I will even betroth you to Me in stability and in faithfulness, and you shall know (recognize, be acquainted with, appreciate, give heed to, and cherish) the Lord. 21 And in that day I will respond, says the Lord; I will respond to the heavens [which ask for rain to pour on the earth], and they shall respond to the earth [which begs for the rain it needs], 22 And the earth shall respond to the grain and the wine and the oil [which beseech it to bring them forth], and these shall respond to Jezreel [restored Israel, who prays for a supply of them]. 23 And I will sow her for Myself anew in the land, and I will have love, pity, and mercy for her who had not obtained love, pity, and mercy; and I will say to those who were not My people, You are My people, and they shall say, You are my God!

Posted by revsusanthebrave at 3:36 AM