The Picnic and the Grape Vision 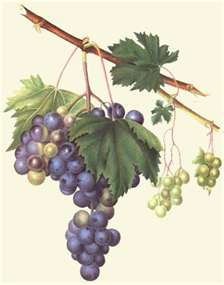 The Picnic and the Grape Vision

I saw a blanket spread out ahead of me in a very nice wooded area. There were lots of bushes, and trees, and birds and lush plants. It looked like summer. The day was sunny and warm. The air was light and energizing. I could smell and feel everything while watching the vision.

I saw Debra, my friend in the natural, sitting on the blanket in the vision. Opposite her was Jesus, and He was kneeling over a picnic basket. He was reaching into the basket and He was taking various things out of the basket for their picnic. He took out some bread and laid it on the blanket. He then took out a bottle of wine. He pauses for a minute, then He reached in to get something else, and I heard Debra ask the Lord, “Jesus, are we going to drink the wine?” He said to her, “No. I have something better.” He smiles at her and then He pulls out a single grape. One grape. He looks at her holding out the grape. Debra says to Jesus, “Is that one grape enough for us both to drink?” The Lord then looked at her and said, “One grape in My Kingdom is enough to satisfy all of your thirst.” Then the vision ended.

I had this same vision again tonight at the meeting at church. Twice on the same day signifies something being established by God to you.

After some thought, I searched the scriptures regarding grapes and drinking with Jesus in His Kingdom:

Matthew 26:29 I tell you I will not drink again of this fruit of the vine until that day when I drink it new with you in my Father’s kingdom."

Drinking it new. The old was passing away. Jesus came to fulfill the old, abolish the old, and birth the new. He came to bring the New Covenant to men. He also will drink it with men, men that walk in true covenant with Him in the earth.

Matthew 13:43 Then the righteous will shine like the sun in the kingdom of their Father. He who has ears, let him hear.

Luke 12:32 "Fear not, little flock, for it is your Father’s good pleasure to give you the kingdom.

Luke 17:21 Neither shall they say, Lo here! or, lo there! for, behold, the kingdom of God is within you.

Men have always looked for an outward kingdom. They wanted Jesus to be their King. They didn’t want Him to be their Lord, within them. They rejected Him. The Church must want Him as Lord within, and also without. The Kingdom is birthed in our spirits at salvation, then it moves outwards throughout our souls, and finally into our flesh, to eventually rule and reign within us, and then to change our world.

Revelations 1:6 and made us a kingdom, priests to his God and Father, to him be glory and dominion forever and ever. Amen.

Revelations 5:10 and you have made them a kingdom and priests to our God, and they shall reign on the earth."

1 Peter 2:9 But you are a chosen race, a royal priesthood, a holy nation, a people for his own possession, that you may proclaim the excellencies of him who called you out of darkness into his marvelous light.

Matthew 4:23 And he went throughout all Galilee, teaching in their synagogues and proclaiming the gospel of the kingdom and healing every disease and every affliction among the people.

Luke 17:20 Being asked by the Pharisees when the kingdom of God would come, he answered them, "The kingdom of God is not coming with signs to be observed, 21nor will they say, 'Look, here it is!' or 'There!' for behold, the kingdom of God is in the midst of you." 22And he said to the disciples, "The days are coming when you will desire to see one of the days of the Son of Man, and you will not see it. 23 And they will say to you, 'Look, there!' or 'Look, here!' Do not go out or follow them. 24 For as the lightning flashes and lights up the sky from one side to the other, so will the Son of Man be in his day.

Again, look at: Matthew 13:43 Then the righteous will shine like the sun in the kingdom of their Father. He who has ears, let him hear.

Its fullness was not destined for the disciples day before the cross, that is why they did not see it then. The Cross had to come, then on Pentecost, the Kingdom reality came within them and they began to manifest the Kingdom and preach the gospel of the Kingdom. But Jesus was speaking of a day afar off when there would be a church in the last days, which would manifest fully the kingdom the way He had ordained it in their generation as a witness in the end. The Light of God would shine on them in the earth.

Mark 14:25 Truly, I say to you, I will not drink again of the fruit of the vine until that day when I drink it new in the kingdom of God."

Again, Jesus speaks of drinking it new with us, when the Kingdom of God that is within us, is to now more fully come out of us. We will shine like Him, we will radiate Him, in this new day. We will manifest the Kingdom and preach the gospel of the kingdom.

Luke 22:18 For I tell you that from now on I will not drink of the fruit of the vine until the kingdom of God comes."

He is coming to drink it new with us, because it is time for the Kingdom of God to be demonstrated through the church in the earth.

Luke 22:14 And when the hour came, he reclined at table, and the apostles with him. 15 And he said to them, "I have earnestly desired to eat this Passover with you before I suffer. 16 For I tell you I will not eat it until it is fulfilled in the kingdom of God." 17 And he took a cup, and when he had given thanks he said, "Take this, and divide it among yourselves. 18 For I tell you that from now on I will not drink of the fruit of the vine until the kingdom of God comes."

Revelations 3:20 Behold, I stand at the door, and knock: if any man hear my voice, and open the door, I will come in to him, and will sup (eat) with him, and he with me.

Romans 8:9 You, however, are not in the flesh but in the Spirit, if in fact the Spirit of God dwells in you. Anyone who does not have the Spirit of Christ does not belong to him.

John 14:20 In that day you will know that I am in my Father, and you in me, and I in you. 21 Whoever has my commandments and keeps them, he it is who loves me. And he who loves me will be loved by my Father, and I will love him and manifest myself to him." 22 Judas (not Iscariot) said to him, "Lord, how is it that you will manifest yourself to us, and not to the world?" 23 Jesus answered him, "If anyone loves me, he will keep my word, and my Father will love him, and we will come to him and make our home with him.

John 17:21 that they may all be one, just as you, Father, are in me, and I in you, that they also may be in us, so that the world may believe that you have sent me. 23 I in them and you in me, that they may become perfectly one, so that the world may know that you sent me and loved them even as you loved me. 26 I made known to them your name, and I will continue to make it known, that the love with which you have loved me may be in them, and I in them.

The Picnic: The Rest of God:

2 Corinthians 6:16 What agreement has the temple of God with idols? For we are the temple of the living God; as God said, "I will make my dwelling among them and walk among them, and I will be their God, and they shall be my people.”

Hebrews 4:1 THEREFORE, WHILE the promise of entering His rest still holds and is offered [today], let us be afraid [to distrust it], lest any of you should think he has come too late and has come short of [reaching] it. 2 For indeed we have had the glad tidings [Gospel of God] proclaimed to us just as truly as they [the Israelites of old did when the good news of deliverance from bondage came to them]; but the message they heard did not benefit them, because it was not mixed with faith (with the leaning of the entire personality on God in absolute trust and confidence in His power, wisdom, and goodness) by those who heard it; neither were they united in faith with the ones [Joshua and Caleb] who heard (did believe). 3For we who have believed (adhered to and trusted in and relied on God) do enter that rest, in accordance with His declaration that those [who did not believe] should not enter when He said, As I swore in My wrath, They shall not enter My rest; and this He said although [His] works had been completed and prepared [and waiting for all who would believe] from the foundation of the world.

Romans 4:19 He (Abraham) did not weaken in faith when he considered his own body, which was as good as dead (since he was about a hundred years old), or when he considered the barrenness of Sarah’s womb. 20 No distrust made him waver concerning the promise of God, but he grew strong in his faith as he gave glory to God, 21 fully convinced that God was able to do what he had promised.

Matthew 9: 6No one puts a piece of unshrunk cloth on an old garment, for the patch tears away from the garment, and a worse tear is made. 17Neither is new wine put into old wineskins. If it is, the skins burst and the wine is spilled and the skins are destroyed. But new wine is put into fresh wineskins, and so both are preserved."

Mark 2:22 And no one puts new wine into old wineskins. If he does, the wine will burst the skins—and the wine is destroyed, and so are the skins. But new wine is for fresh wineskins."

Luke 5:37 And no one puts new wine into old wineskins. If he does, the new wine will burst the skins and it will be spilled, and the skins will be destroyed. 38 But new wine must be put into fresh wineskins.

Job 32:18 For I am full of words; the spirit within me constrains me. 19 Behold, my belly is like wine that has no vent; like new wineskins ready to burst. 20 I must speak, that I may find relief; I must open my lips and answer.

Jeremiah 20:9 Then I said, I will not make mention of him, nor speak any more in his name. But his word was in mine heart as a burning fire shut up in my bones, and I was weary with forbearing, and I could not stay.

Isaiah 65:8 Thus says the LORD: "As the new wine is found in the cluster, and they say, 'Do not destroy it, for there is a blessing in it,' so I will do for my servants’ sake, and not destroy them all. 9 I will bring forth offspring from Jacob, and from Judah possessors of my mountains; my chosen shall possess it.