I took a picture of an angel in front of our vehicle as we drove to : 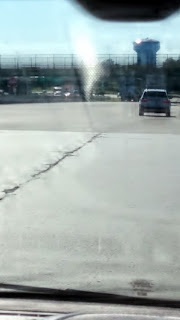 This angel is in the form of a cloudy whirlwind.

The heavens have been opened over the regional area with a dual flow, so that His People would know, what He is about to show... revelation for the days ahead released to those who are seeking Him: The Angels have opened a golden portal over the Niagara Falls, Rochester, and Syracuse areas, and then they lined it all inside with gold. The angels then flew into it again and lined the walls of the portal with themselves.

The Lord said to the Niagara Falls House of Prayer Group:


I then saw Spiritual stadiums full of angels formed all over the 3 cities within the region, and it looked like tiers of crystal layers, stacked on top of each other, each tier was full of myriads of angels who were sent here to help, to fight, and to establish the Lords Purposes.


Some whirlwinds even became Great Furnaces of Glory for Him. God wants Furnaces of Glory and Prayer in this region to rise up to Him before His throne. Then I saw one furnace that had a door within it that opened up. I saw fire that came violently roaring out of the door. I saw people then run to the furnace and jumped into the door. Those who willingly cast themselves into the Glory were walking around in it with The Lord, but those who only looked in, and who wouldn't get in, were burned up at the door. The Lord is looking for our participation with Him.


Michael also came and cut off the enemies restraints that were blocking people from fully giving themselves to the Lord and to His Purposes for their lives in the region, and Michael also cut the demonic witchcraft cords that held back the full flow of the Glory from breaking open here in the region.

Jesus then came, wearing a cloak of blue lightning bolts flashing all around Him. He took a lightning bolt from His garment and put it in each person that responded to Him, and it became a flame inside them. The Lord took each person and then set them on top of the clouds over the city so that they could see from His view. Then he touched them and they became burning coals, or living stones, and they were also set into the walls of the portal over the region, and they lined the walls of the portal along with the angels over the city. They were now to be the Living Stones that the Lord is setting up all over the region.

The Lord says to :

From 2011 to 2013: The Lord used different instruments to bring change to His People in the 3 City Region:

I saw the Lord use a long rod with a sharp pick on it to pick up papers, clutter and trash. (Flesh)


I saw the Lord use a hand cultivator that twists to pull up weeds, or arguments, reasoning's, lies (in our souls)


This process manifested in us as : Irritations - Frustrations - Stress - Fears, as we transitioned into wholeness

I then saw Great reaping angels then came through the portal into the region that were 35 miles high in their stature.


October thru December 2013:  A Season of Intense Separation and a Beautification of His People:

Wars and battles broke out, signaling an intense season of reaping of the good/bad seeds sown, and exposing the deeds that were done. I saw the hand of The Lord writing on the spiritual walls of many places - signaling a major shift of leadership, also a redrawing of the current religious streams that now flow, into a new purer, truer exchange. I saw angelic Adjuncts from the Lords court come here to enforce the Lord's mandates and edicts concerning you. I saw angelic Court Reporters, and Court Recorders come to document your walks and the meetings. God is going to bring changes to districts, to precincts, and even to jurisdictional borders in the cities of the region.

I then saw a Great Eagle within region and he was facing from East to the West. He watches over , , and . The first phase of release has begun, and will grow until we mature, and will become established by the Lord.

I am sitting at the sound table at church tonight, and I hear The Lord say, "My Eagles are coming. " I then look up, and, I see great eagles flying at a distance, and there is a whole group of them. As they got closer, I saw that each eagle was a different color, shape, and size, but all of them were living flames. The eagles then fanned out into different directions, and went all over our region to various areas they were assigned to. The eagle that came here was made up of golden fire, and each feather was a single flame, and he had layers and layers of feathery flames. His eyes were green fire, and he was very regal and fierce. His eyes looked right through you. He was 10 feet tall from feet to the top of his head. He opened his beak, and golden fire came out of his beak, and filled the atmosphere of the meeting at the church tonight.

Isaiah 40:31 But those who wait for the Lord [who expect, look for, and hope in Him] shall change and renew their strength and power; they shall lift their wings and mount up [close to God] as eagles [mount up to the sun]; they shall run and not be weary, they shall walk and not faint or become tired.

Sign of the Eagle flew that into ORU on 08-21-13:
Video can be seen at:    http://youtu.be/XIB-BtxtLsw
Then....... this was posted online from my daughter-in-law Alisha who went shopping with friends. She had no idea! 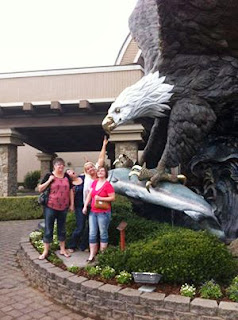 Then I read a posting from Colleen:  (Shared with permission)


Something cool happened! I went fishing with my husband at the mouth of the Columbia ...a major king and silver salmon fishery called 'buoy 10' ...crazy with 1000's of boats waiting for the bite to start. I decided to try to command nature ...I spoke to the salmon and commanded a trophy king salmon to impale itself on my hook (thinking of Jesus when he commanded a fish to pickup tax money and then to be caught). I told the salmon that he knew that I was talking to him and that I would appreciate his cooperation. ...that in the name of Jesus Christ, it should do so.


Suddenly the bite started and many were catching silvers. I caught one ...but it got away. I called my trophy king again and called him forth. I decided that I should check my pole (it was in the pole holder) and I had a fish! ...a BIG fish! It took my line out and out ...100 feet farther out! I couldn't real him in until I tightened the clutch on the reel.


THEN, I couldn't reel him in because I didn't have the strength to let go with one had to grasp the reel handle ... I was afraid that he'd take my pole out of my hands. I thought I'd let him wear himself out ...after about 15 minutes I had to 'allow' my husband to take over because I physically was not strong enough to keep going. We lost the fish!


My husband (who has fished a lot) said it definitely fought like a king rather than a silver and that it was a least 25 lbs. ...Not a huge king ...BUT, no one else caught a king while we were there and it WAS a honorable size ...therefore would of been a trophy for the day!!! The lesson here?!? ...Next time finish the fight in the spirit by commanding the fish to STAY on the hook, when to stop fighting so hard and to 'GET IN THE BOAT'!!! ... It's all about the finishing and the details rather than getting excited at an initial taste of success ...gotta go all the way next time!  - Posted on 08-21-13


We need more strength, more endurance, more commitment to the vision, and a full surrender to Him in our lives.


We are learning how to use His Word and to command and decree it properly, and to steward the flow of His Glory properly.


We are growing up into the responsibility we have for people's lives, and for the region we are all called to.


We are becoming the mature Sons the Lord wants to use to rule and reign in our various positions, to bring the harvest in.