The Chiseled Angels and the Angel named Justice

The Chiseled Angels and the Angel named Justice: 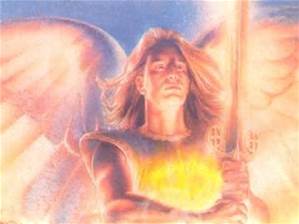 The Podcast can be found at:

As we approached the door to open the church tonight before the service, instantly a whole bunch of new Angels walked up to the door with us. These new Angels were very large, fierce, and they had chiseled features and even heavy chiseled armor on. I instantly knew it had to do with God's hammer. God has sent them to hammer out all resistance, opposition, and barriers to God's people preventing them from their purposes.

Then, in the meeting, as I was sharing these things in the pulpit, the Angel "Justice" entered the church. His clothes were moving, because wind was blowing through them from behind, the wind was coming from within his very being. He had scales in his one hand.

God's Justice has come, and Justice is on the move, and Justice has begun to deal with everything that is not right in His sight, and also He is dealing with the enemy and his works that are obstructing the purposes that God has written for our day.

Be encouraged, you who are in hard places, for Gods Hammer is going to break things up, and Justice will bring everything into the light and into order. Trust God's hand, and take your stand, for divine change is going to hammer everything in your land!

Jeremiah 23:29 Is not My word like fire that consumes all that cannot endure the test?” says the Lord, “and like a hammer that breaks the most stubborn rock in pieces?

Proverbs 11:1-3 A false balance and dishonest business practices are extremely offensive to the Lord,But an accurate scale is His delight. When pride comes boiling up with an arrogant attitude of self-importance, then come dishonor and shame,But with the humble the teachable who have been chiseled by trial and who have learned to walk humbly with God there is wisdom and soundness of mind. The integrity and moral courage of the upright will guide them,But the crookedness of the treacherous will destroy them.

Isaiah 22:17-23 ‘Listen carefully, the Lord is about to hurl you away violently, O man;And He is about to grasp you firmly And roll you up tightly like a ballAnd toss you into a vast country;There you will dieAnd there your splendid chariots will be,You shame of your master’s house.’ “I will depose you from your office,And you will be pulled down from your position of importance. “Then it will come to pass in that dayThat I will summon My servant Eliakim the son of Hilkiah. “And I will clothe him with your tunic of distinctionAnd tie your sash securely around him.I will entrust him with your authority;He will become a father to the inhabitants of Jerusalem and to the house of Judah. “Then I will set on his shoulder the key of the house of David;When he opens no one will shut,When he shuts no one will open. “I will drive him like a peg in a firm place,And he will become a throne of honor and glory to his father’s house.

Hebrews 12:22-29 But you have come to Mount Zion and to the city of the living God, the heavenly Jerusalem, and to myriads of angels in festive gathering, and to the general assembly and assembly of the firstborn who are registered as citizens in heaven, and to God, who is Judge of all, and to the spirits of the righteous the redeemed in heaven who have been made perfect bringing them to their final glory, and to Jesus, the Mediator of a new covenant uniting God and man, and to the sprinkled blood, which speaks of mercy, a better and nobler and more gracious message than the blood of Abel which cried out for vengeance. See to it that you do not refuse to listen to Him who is speaking to you now. For if those sons of Israel did not escape when they refused to listen to him who warned them on earth revealing God’s will, how much less will we escape if we turn our backs on Him who warns from heaven? His voice shook the earth at Mount Sinai then, but now He has given a promise, saying, “Yet once more I will shake not only the earth, but also the starry heaven.” Now this expression, “Yet once more,” indicates the removal and final transformation of all those things which can be shaken—that is, of that which has been created—so that those things which cannot be shaken may remain. Therefore, since we receive a kingdom which cannot be shaken, let us show gratitude, and offer to God pleasing service and acceptable worship with reverence and awe; for our God is indeed a consuming fire.


Posted by revsusanthebrave at 6:06 PM