I saw a mountainous region and on one mountain was a large stone castle. It had a long road winding up the mountain to the top where the castle was. At the entrance was a stone gateway arch, and through that was a great stone courtyard. It had a circular driveway that wound around till it got to the door of the castle and then it went on around the courtyard till it went back out to the road leading down the mountain. So it was circular inside the courtyard. In the midst of the circular driveway there was a large silver tree with silver leaves. The driveway wound around the tree as it went back out.
As I watched, I saw a golden dove fly through the archway entrance and it flew around the driveway in a circle till it went all the way around the tree, then it exited out through the gate again. Then a few moments later, another golden dove flew in and did the exact same thing. It flew around the driveway and tree and back out again too. Then a few moments later, another golden dove came in and did the exact same thing as the other two doves did. After the third golden dove went out, I saw a stream of cars and people who were also walking begin to enter the archway and walked around the driveway, and went around the tree in the midst of the driveway, and when they came around the other side of the tree, they were changed. They kept going till they exited just like the 3 golden doves did. The stream of cars full of people, and people who were walking was endless, it just kept flowing in and out continually. As they all passed the tree, they all came out changed and went back down the mountain.


I came out of the bedroom to tell Patrick my dream, and he shared some insights about it with me that came to him.


I was watching a video of Rick Joyner meeting with a man from . He had been in Rick's meetings in in 1995 and after. Rick had given them prophecies about their nation of . He then went back and asked God how to see the prophesies fulfilled, and God told him to go to the Farmers in .


He called them, and 1200 farmers showed up for the first meeting. He taught them all the principals of the Bible, and about God's righteousness. They also needed to dedicate their lives, and their farming ground to God, and to pray over their land. The farmers did this, and they saw miracles in their crops and in their natural harvests. One farmer is reaping three times the size of his potato produce now than before.


Another corn farmer in Switzerland had his field devastated by hail because when the storm approached the Lord told him to take authority over it and he was afraid and didn't. His entire crop was flattened, and when he repented regarding his not taking authority over the storm before it came, the Lord honored his repentance, and the Lord caused the corn that was flattened in the field to supernaturally sprout right where it laid, and grow again, and it grew two ears of corn to each, instead of one. The government said this was impossible, and that it was actually a whole new breed of corn that was now created!


The Holy Spirit also reminded me of the 20 end-time Harvest angels I saw on July 17th 2011, the first one was the angel of .


The Tree Susan saw was the Tree of Life. I saw a dream years ago and I saw the Tree of Life and it had silver leaves, I saw Prophet Bob Jones standing next to the Tree.


The three golden Doves Susan saw were the Holy Spirit, and three Moves of the Spirit, or the three pulls vision, or the three last day Harvests prophesied by William Branham.


Bob Jones said that the 3 harvests were:

The first two harvests were the harvesters being saved and raised up for the billion soul harvest that would begin to come in, in 2020 and beyond. The church must build a great network of harvesters and a vast infrastructure of the Spirit to be able to handle the influx and weight of the masses that will flow into it.


As I was thinking more about the vision while cooking dinner, the Holy Spirit said to me:


It also has to do with the Novice, Apprentice, and Master. (The 3 stages of growth and maturity.)


Then He said, it also has to do with what I told you on Wednesday morning regarding 12-12-12.
The three sequences of:  Wisdom - Knowledge - Understanding.
Upon these things is the House of the Lord built and you come to full maturity. 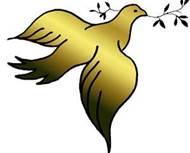 Here is some excerpts from that previously posted Revelation:


Today, on 12-12-12, the Lord showed me more about the significance of this date and what He wants us to understand from it. God speaks through dates and times as signs to people that will notice them and uses these things to cause us to dig into them for more truth. Let us realize that God is here in our midst, and His Government is being set up all around us and it is coming from within us, and it will bring permanent change as we walk it out with Him.


- The Triune Government of God - is descended and is indwelling and we are in the beginning of it's revealing purposes, and in it's flowing outwards through His People - who have allowed that very Government to purge them, and to utterly bring their carnal lives to a full death within them, and to remake and fashion them into His Holy Habitation, and they have now awakened to their new position in the earth...tit is now the season changing of the guards, and the emerging of the new leaders has begun.


The outworking of this indwelling process will now begin to flow out of the lives of those who have been faithful to endure the death process, and who have remained in His Hands as the Lord brought the changes that were necessary for them. You have prevailed! Now you will be brought forth by Him!


Now it is time for the Lord to come forth through each person, and to bring His Church into His Order and into it's full position of governance in the earth. The next few years will see this unfold and begin to solidify as each obey His instructions.


God will release the wisdom, the knowledge, and the understanding required to build, and to lead, and to flow throughout the earth, to bring forth the true purposes of God and His Plan for this generation.


Wisdom - Knowledge and Understanding = The Triune Key to Governing Authority!

Proverbs 24:3 Through skillful and godly Wisdom is a house (a life, a home, a family) built, and by understanding it is established [on a sound and good foundation], 4 And by knowledge shall its chambers [of every area] be filled with all precious and pleasant riches.


1 Corinthians 2:6 Yet when we are among the full-grown (spiritually mature Christians who are ripe in understanding), we do impart a [higher] wisdom (the knowledge of the divine plan previously hidden); but it is indeed not a wisdom of this present age or of this world nor of the leaders and rulers of this age, who are being brought to nothing and are doomed to pass away. 7 But rather what we are setting forth is a wisdom of God once hidden [from the human understanding] and now revealed to us by God--[that wisdom] which God devised and decreed before the ages for our glorification [to lift us into the glory of His presence].


Revelations 22:2 Through the middle of the Broadway of the city; also, on either side of the river was the tree of life with its twelve varieties of fruit, yielding each month its fresh crop; and the leaves of the tree were for the healing and the restoration of the nations.