Joining The Heavenly Council of the Lord Experience– 09-11-15

Joining The Heavenly Council of the Lord Experience– 09-11-15 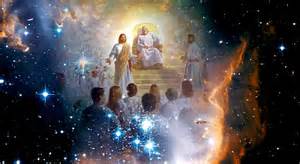 I was resting on my bed and the angel said, “Come, it’s time to go to the Council.” So immediately we were standing near a group of people that were all sitting in a circle around a fire and it looked a setting from ancient bible times. Some had their heads covered, some were reclining, but they were all waiting for something. I looked around as they all waited, and I began to have a vision of a baby that was restless and upset, so I saw 2 large hands place it on a mother’s chest, and soon the baby settled down as it began to hear the mother’s heart beat. The baby got into rhythm with the mothers heartbeat and it was soon resting. The vision left, and I was still standing there watching the council.

All of a sudden it seemed like time itself slowed down and everything became suspended. I could hear my own breathing and I could hear the fire as it crackled, but nothing moved. Then it was like everything became still inside and outside, it was all suspended somehow, and I was aware of only the Lord. I could feel Him everywhere, inside me, and also all around. The entire atmosphere was charged with Him. A rush then came and we all were illuminated from within. It was like His living essence swirling in our cells, and we all saw with perfect clarity and heard Him speaking with clear understanding, for we were in Him. I then saw us all suspended within His heart. We were of one heart and one mind, within Him, and we were in His heart, and we all understood His mind. This was full union.

He said, “These are the days in which you must gather unto Me even more. For the clamor of the voices will only grow louder with the burdens of the sinful world that is in the earth. My People, You must build My Habitation. You cannot build according to what you have learned of men on the earth, no! You must build with the knowledge of Me! You must come to Me, to hear from Me. In order to know what I am doing in the earth, and especially in your day, you will have to draw nearer to Me, in order to clearly see. You must learn to be united with Me. You must learn to bring your hearts and minds into rhythm with Mine. You must understand what the mind of the Spirit is, or you will miss what I am doing. I have a plan for you. Only those that move in rhythm with My Spirit, will move securely in the days ahead, and will be full of My peace. Do not be troubled by the things you currently see and hear, but learn to draw even more near. You are to live this close to Me, and as you do, you will joyfully do that things that I tell you to do. This is not a time to be fearful, anxious, or scattered. This is not a time to be wasting My time. I have given time to you to bring the harvest in, but you cannot use this time as would other men. My Glory is moving in your midst and is bringing a deep and full separation. More intense things in the earth are about to begin, for the light of My Glory is going to break out from within. I am going to have a Glorious Habitation! I am going to shake all nations, and all men, and you must all learn to shut out the clamor of men. It is time to meet with Me even more corporately. I am going to gather My Heavenly Council’s even more. I have much to say to you concerning your days. It’s time to join with Me, and to join together hand in hand. It’s time to fully understand the things that will shortly begin across every land. It’s time to come to My Council and to understand My Plan.”

As the Lord spoke, I was instantly aware of the passage of Exodus 24, where the 74 elders were gathered by the Lord’s instruction to His Mountain to meet with Him.

Then the angel with me then spoke and said, “The baby you saw in the vision is current condition of the church. She is agitated and is not in rhythm with the Lord, and she must tune herself to His heart and to His mind. You cannot listen to men, and also listen to Him. You cannot join yourself to men, and join yourself to Him. You must bring your lives into divine order, and learn to draw from Him now. Time is short, and you must grow up into spiritual manhood, and prepare for the great changes to come.”

As I opened up my bible program to look up verses on the Lord’s council, and this was the opening verse:

[The Lord the Keeper of Israel.] [A Song of Ascents.] I will lift up my eyes to the hills [of Jerusalem]— From where shall my help come? My help comes from the Lord, Who made heaven and earth.      Psalm 121:1-2 AMP

Exodus 24:1 Then God said to Moses, “Come up to the Lord, you and Aaron, Nadab and Abihu (Aaron’s older sons), and seventy of Israel’s elders, and you shall worship at a [safe] distance. 2 Moses alone shall approach the Lord, but the others shall not come near, nor shall the people come up with him.” 3 Then Moses came and told the people everything that the Lord had said and all the ordinances. And all the people answered with one voice, “Everything the Lord has said we will do.” 4 Moses wrote down all the words of the Lord. Then he got up early in the morning, and built an altar [for worship] at the foot of the mountain with twelve pillars (memorial stones) representing the twelve tribes of Israel. 5 Then he sent young Israelite men, and they offered burnt offerings and sacrificed young bulls as peace offerings to the Lord. 6 Moses took half of the blood and put it in large basins, and [the other] half of the blood he sprinkled on the altar. 7 Then he took the Book of the Covenant and read it aloud to the people; and they said, “Everything that the Lord has said we will do, and we will be obedient.” 8 So Moses took the blood [which had been placed in the large basins] and sprinkled it on the people, and said, “Behold the blood of the covenant, which the Lord has made with you in accordance with all these words.” 9 Then Moses, Aaron, Nadab, and Abihu, and seventy of the elders of Israel went up [the mountainside], 10 and they saw [a manifestation of] the God of Israel; and under His feet there appeared to be a pavement of sapphire, just as clear as the sky itself. 11 Yet He did not stretch out His hand against the nobles of the Israelites; and they saw [the manifestation of the presence of] God, and ate and drank. 12 Now the Lord said to Moses, “Come up to Me on the mountain and stay there, and I will give you the stone tablets with the law and the commandments which I have written for their instruction.” 13 So Moses arose with Joshua his attendant, and he went up to the mountain of God. 14 And he said to the elders, “Wait here for us until we come back to you. Remember that Aaron and Hur are with you; whoever has a legal matter, let him go to them.” 15 Then Moses went up to the mountain, and the cloud covered the mountain. 16 The glory and brilliance of the Lord rested on Mount Sinai, and the cloud covered it for six days. On the seventh day God called to Moses from the midst of the cloud. 17 In the sight of the Israelites the appearance of the glory and brilliance of the Lord was like consuming fire on the top of the mountain. 18 Moses entered the midst of the cloud and went up the mountain; and he was on the mountain forty days and forty nights.

Jeremiah 23:15 Therefore thus says the Lord of hosts in regard to the prophets, ‘Behold, I am going to feed them [the bitterness of] wormwood and make them drink the poisonous water [of gall], For from the [counterfeit] prophets of Jerusalem profaneness and ungodliness have spread into all the land.’” 16 Thus says the Lord of hosts, “Do not listen to the words of the [false] prophets who prophesy to you. They are teaching you worthless things and are leading you into futility; They speak a vision of their own mind and imagination and not [truth] from the mouth of the Lord. 17 “They are continually saying to those who despise Me [and My word], ‘The Lord has said, “You will have peace”’; and they say to everyone who walks after the stubbornness of his own heart, ‘No evil will come on you.’18 “But who [among them] has stood in the council of the Lord, That he would perceive and hear His word? Who has marked His word [noticing and observing and paying attention to it] and has [actually] heard it? 19 “Behold, the tempest of the Lord has gone forth in wrath, A whirling tempest; It will whirl and burst on the heads of the wicked. 20 “The anger of the Lord will not turn back Until He has set in motion and accomplished the thoughts and intentions of His heart; In the last days you will clearly understand it. 21 “I did not send [these counterfeit] prophets, Yet they ran; I did not speak to them, Yet they prophesied. 22 “But if they had stood in My council, Then they would have caused My people to hear My words, Then they would have turned My people from their evil way And from the evil of their decisions and deeds. 23 “Am I a God who is at hand,” says the Lord, “And not a God far away?” 24 “Can anyone hide himself in secret places so that I cannot see him?” says the Lord. “Do I not fill heaven and earth?” says the Lord.

Ephesians 4:11 And [His gifts to the church were varied and] He Himself appointed some as apostles [special messengers, representatives], some as prophets [who speak a new message from God to the people], some as evangelists [who spread the good news of salvation], and some as pastors and teachers [to shepherd and guide and instruct], 12 [and He did this] to fully equip and perfect the saints (God’s people) for works of service, to build up the body of Christ [the church]; 13 until we all reach oneness in the faith and in the knowledge of the Son of God, [growing spiritually] to become a mature believer, reaching to the measure of the fullness of Christ [manifesting His spiritual completeness and exercising our spiritual gifts in unity]. 14 So that we are no longer children [spiritually immature], tossed back and forth [like ships on a stormy sea] and carried about by every wind of [shifting] doctrine, by the cunning and trickery of [unscrupulous] men, by the deceitful scheming of people ready to do anything [for personal profit]. 15 But speaking the truth in love [in all things—both our speech and our lives expressing His truth], let us grow up in all things into Him [following His example] who is the Head—Christ. 16 From Him the whole body [the church, in all its various parts], joined and knitted firmly together by what every joint supplies, when each part is working properly, causes the body to grow and mature, building itself up in [unselfish] love.

We are all building according to His Pattern, within and without!

Posted by revsusanthebrave at 1:54 PM