The Underground Mine Shafts vision 12-4-11 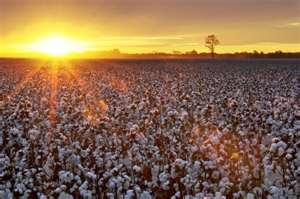 The Harvest Fields Of Cotton 12-6-11
I saw in the vision a field. It was full of plants and I knew that they were cotton plants. As far as you could see there was cotton plants and they were ready. I watched and I saw a fire come and sweep the field and as it did, the cotton burst open on the plants. The whole field was white with the cotton puffs. Then a wind came and the cotton balls were blown upon till the cotton began to lift up and they all then rose upon the winds and blew all over the earth.
The Lord said, "This is your inheritance, the Harvesters that are being made ready for the fields of the world. I am showing you this in this way so that you can see that I have made them ready through their fiery trials. I now have released My Winds of Change into their lives. I will lift them higher into the freedom and liberty of My Spirit that I have ordained for them, and I will cause them to burn even more with My Vision for the Harvest, and they shall arise and be carried by Me to the fields of the earth to do My will. The cotton represents the fabric of My Body. My Workmanship. With My Fabric I can weave My Glorious Tapestry for all of the world to see. You are called to help them. You are called to teach them, to mentor them, and to encourage them. I have set My teachers in the Body for a reason, to equip My People. I have set My apostles and prophets in the Body for a reason, to guide them. I have raised up all of My leaders for a reason, to lead and to feed them. As you each obey Me, then they shall be the fruit that comes forth from you, and you shall inherit the earth. It is time to build My Body. It is time for you all to bring forth My Harvesters, for the fields are ripe and I am moving in the earth."
John 4:34 Jesus said to them, My food (nourishment) is to do the will (pleasure) of Him Who sent Me and to accomplish and completely finish His work. 35 Do you not say, It is still four months until harvest time comes? Look! I tell you, raise your eyes and observe the fields and see how they are already white for harvesting. 36 Already the reaper is getting his wages [he who does the cutting now has his reward], for he is gathering fruit (crop) unto life eternal, so that he who does the planting and he who does the reaping may rejoice together. 37 For in this the saying holds true, One sows and another reaps. 38 I sent you to reap a crop for which you have not toiled. Other men have labored and you have stepped in to reap the results of their work.
Luke 10:2 And He said to them, The harvest indeed is abundant [there is much ripe grain], but the farmhands are few. Pray therefore the Lord of the harvest to send out laborers into His harvest.
Isaiah 9:1 BUT [in the midst of judgment there is the promise and the certainty of the Lord's deliverance and] there shall be no gloom for her who was in anguish. In the former time [the Lord] brought into contempt the land of Zebulun and the land of Naphtali, but in the latter time He will make it glorious, by the way of the Sea [of Galilee, the land] beyond the Jordan, Galilee of the nations. 2 The people who walked in darkness have seen a great Light; those who dwelt in the land of intense darkness and the shadow of death, upon them has the Light shined. 3 You [O Lord] have multiplied the nation and increased their joy; they rejoice before You like the joy in harvest, as men rejoice when they divide the spoil [of battle].


Posted by revsusanthebrave at 1:18 AM