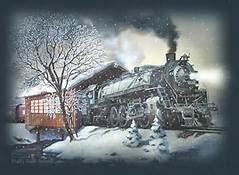 
I saw a quick vision, and I was on an old west train. It was a big black iron locomotive with many cars on it. We were going to another destination. As we got closer to the depot, I looked out of the window. I saw the sign of the place we were to stop at, and it said, "New ."
On 02-11-14, The Lord gave me more insights on this vision above:
There are new directives and resources being delivered to from the Lord to accomplish in 2014, as well as her being a sign to the other nations of the earth also of what He is going to do:
"The Conductor" - Jesus - is examining the conduct of His People and His Nation to see if it is in readiness for the changes that will now begin to come to the land and culture. The emphasis will be upon the willingness to receive Him, and to allow the old to be removed from their midst.
There will be a major shift in leadership in 2014, in which trains represent, as "TRAIN-ING" will be going to the next level this year. This will be across the board, whether in the church or outside of the church, the Lord is inspecting the "conduct" -  the attitudes, the fruit, the motives, and their vision, to see if there is a readiness for expansion in the knowledge of Him. A New Wave of fresh Vision is being unloaded from the Train, to enlarge and expand across the land.

"New Pardons" - will be given as a sign of God releasing many captives, many prodigals, and many outcasts into fresh new relationships and arenas of faith.
"New Legislation" - will be brought out that will shake the people's in Canada at first, but it will be the very thing that will awaken her to her destiny, and waves of the Lord's  fire will escalate across her to the degree that they respond to the Lord's call.
"New Records" - will be set, that will break long standing old records, to show forth a new birthing and a new thrusting forth in her potential and in her identity of herself as a nation, and as a powerful instrument in the Lord's hand in the decades ahead.
"New Currency" - I saw new currency being distributed, that was partly symbolic of the revelation of the currency of Heaven finally being utilized for the Lord's purposes, for the purpose that God intended. A shift in expenditures and in accounting will reveal a surplus that can be drawn upon in the time of need, that was not realized until now.
"New Voices" - A New Sound will awaken the Spirit of , that will cause her to become the "New ", that the Lord has patiently labored over her for 40 years. This is a new revelation of the "Promises of God" that will burn like Fire within her nation, and will sweep the ones that are open into their inheritances, beginning this year and onwards. The old regime will begin to crack and crumble as the rubble of the old corrodes under the weight of change, and the Winds of His Voice will sweep multitudes through.
"New Challenges" - Challenges will increase as the Lord allows everything to shake. Intense situations even in the affairs of state, will reveal the old diseased roots, so they can be dealt with, and removed that oppose the "Tracks" the Lord desires to lay within them and also before them.
"New Confrontations" - Not only in government halls, but all the way down into homes, until the Lord can hear real faith in their speech again.  He wants to position her so He can trust them with His wealth once again. He is planting the "New Seeds", and in the decades to come, she shall meet many nations needs. She will "train" nations in the Glory, and feed them with the Knowledge of Him.
"New Destinations and Hubs" - The results of the old inefficient methods of commerce, administration, and transportation will come to a climax this year. The pressure will force a more efficient system to be received, for the transmission of God's directives and resources to be brought forth to realign the nation, and outwards into the nations. "New Tracks" being laid are for a more effective mobilization of national and personal resources.
"New Junctions" - are being now being positioned by the Lord that will have the capacity to redirect the flow to where it will be needed. A New "Rail-Line" will be launched. Some hubs that were not right will be bypassed for the newer more efficient hubs or centers which will open up to Heaven's administration, which will meet nations need for help, and for God's greater resources to come together, so that Canada will shine in her New Design.
It's 's time to rise up into the Higher revelations for her nation that God has reserved for this Season.

The transition will be expansive and intensive, but the result will be a People that are prepared by Him, and also for His Purposes.

The Wisdom that comes down from above will fall upon those in who "see" the "Train" that has come, and who will position themselves to now run.

Elisha was "trained" by Elijah to fulfill the rest of the story, and He began when he saw the Lord display His Hand.

The old ways had to be rent and threw aside, and then in Elijah's stead could Elisha now abide.

It's time for and for the new leadership  there to lead the way into the New!
2 Kings 2:11 As they were walking along and talking together, suddenly a chariot of fire and horses of fire appeared and separated the two of them, and Elijah went up to heaven in a whirlwind. 12 Elisha saw this and cried out, “My father! My father! The chariots and horsemen of !” And Elisha saw him no more. Then he took hold of his garment and tore it in two. 13 Elisha then picked up Elijah’s cloak that had fallen from him and went back and stood on the bank of the . 14 He took the cloak that had fallen from Elijah and struck the water with it. “Where now is the LORD, the God of Elijah?” he asked. When he struck the water, it divided to the right and to the left, and he crossed over.
- Susan O'Marra
- 02-11-14

Posted by revsusanthebrave at 6:36 AM