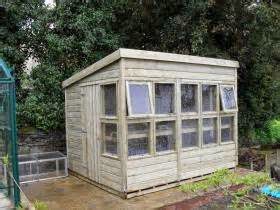 I was resting on my bed, when suddenly I see a shed in a very beautiful landscaped place. The shed was made of wood, and had three walls that were wood, and the fourth wall was made up of all windows. The shed faced the direction of the sunrise. It was just before dawn, in a crisp spring morning. The path that I was walking on went right by the shed.

As I drew closer to the shed, I saw Jill Austin also walk up to the shed from across the yard. She had on white loose fitting pants and a white tunic, and she was barefoot. She got to the door just when I arrived at the door of the shed too. She smiled at me as I arrived and nodded, then she went in, with me following her. 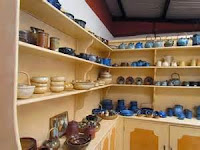 Inside the shed were many shelves on the walls lined with various pots and dishes. There were workbenches underneath the shelves that were also filled with various instruments, cloths, paints, brushes, and clays. She ran her fingers along the surface of the workbench lovingly and then walked over to the other side of the shed and reached up and took down an apron from a hook on the wall and put it on. She then turned around and smiled, and said, “We are just in time.”

She went over to some clay pots that were on a higher shelf and took one set down. They looked like shoes. They were clay pots shaped like shoes. She put them on her feet. Then she took 2 more down from the high shelf and handed them to me. “Put them on,” she said. So, I bent down and slid my feet into them. I was amazed; they felt so nice, and fit me perfectly. She nodded in satisfaction, and said, “The shoes will always fit, if you are called to it.”

Then she walked over to the windows and looked out at the early pre-dawn sky. She seemed to be waiting for something. I watched out the window along with her. You could hear the birds singing outside. She then turned to me and said, “As long as you wear the Potter’s shoes, you will always have the Potter’s views.” She then winked at me and turned back to look out of the windows. 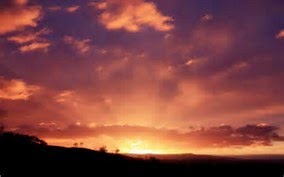 All of a sudden, the sun began to rise on the horizon, and the shafts of light from the rising sun were gloriously bright and orange colored. The brilliant sunlight rays filled the shed where we stood. All of the different pots on the shelves in the shed seemed to come alive. I looked over at Jill after a few moments, and her eyes were full of the same fire as the sunrise. - The vision ended.

Scriptures the Lord gave to me:

Jeremiah 18:2 Arise and go down to the potter’s house, and there I will cause you to hear My words.

Isaiah 41:25 I have raised up and impelled to action one from the north [Cyrus], and he comes; from the rising of the sun he calls upon My name [recognizing that his victories have been granted to him by Me]. And he shall tread upon rulers and deputies as upon mortar and as the potter treads clay. [He comes with the suddenness of a comet, but none of the idol oracles of the nations has anticipated it.]

2 Chronicles 36:23 Thus says Cyrus king of Persia: All the kingdoms of the earth the Lord, the God of heaven, has given me, and He has charged me to build Him a house in Jerusalem, which is in Judah. Whoever there is among you of all His people, may the Lord his God be with him, and let him go up [to Jerusalem].

Ezra 1:1 Now in the first year of Cyrus king of Persia [almost seventy years after the first Jewish captives were taken to Babylon], that the word of the Lord by the mouth of Jeremiah might begin to be accomplished, the Lord stirred up the spirit of Cyrus king of Persia so that he made a proclamation throughout all his kingdom and put it also in writing: 2 Thus says Cyrus king of Persia: The Lord, the God of heaven, has given me all the kingdoms of the earth, and He has charged me to build Him a house at Jerusalem in Judah. 3 Whoever is among you of all His people, may his God be with him, and let him go up to Jerusalem in Judah and rebuild the house of the Lord, the God of Israel, in Jerusalem; He is God.

Isaiah 41:25 Cyrus came from the east (Isa. 41:2), but defeated a number of kingdoms north of Babylon early in his reign. Palestinian authors frequently perceived invasions as coming primarily from the north.

Isaiah 41:2 Who has roused up one [Cyrus] from the east, whom He calls in righteousness to His service and whom victory meets at every step? He [the Lord] subdues nations before him and makes him ruler over kings. He turns them to dust with the sword [of Cyrus], and to driven straw and chaff with his bow.

As our feet fully walk the course laid out for us by the Lord, we will always see the things as He sees, and we shall accomplish the tasks that we were fashioned for in this hour. It is time to step into the Potter’s shoes and get His true Harvest view!

Posted by revsusanthebrave at 8:08 AM