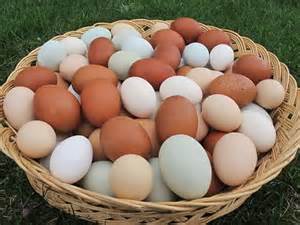 I saw the Lord come smiling with a basket in his arms. The basket was full of small colorful eggs. I looked at the basket of eggs, and wondered what the eggs were for. I looked at the eggs, and they were about the size of a duck egg. The Lord then shook His head, and said, “No. They are not duck eggs, these are eagle eggs.” I thought, “Eagle eggs?” The Lord then grinned broadly and handed the basket out towards me to take it. I reached out to take the basket, and the Lord kept His hands on it too.

He nodded, and said, “These are eagles that are about to be hatched, and they must be tended to. They cannot be left to themselves, but must be nurtured and protected as they grow. I am entrusting them to your care, and they shall begin to walk with you everywhere. Each one has special gifts and qualities that I have put within them, but they must be nurtured so those qualities and gifts can be brought to maturity quickly and completely. You must teach them to trust in Me, and to trust Me within the Body.”

“Many of My prophets have been misused, and have been abandoned and controlled by leaders and by the Body of Christ. Because of this, they have not developed properly, and have not come to full maturity. The revelatory things that I have placed within My prophets have not been fully received or embraced by this generation, and this needs to change. It is time for My leaders and My body to receive the gifts that I have laid within them, for this will bring the Church to full maturity in your generation.”

“The many colors that you see are the varied degrees of gifting and revelation of Me that I have deposited within them. Without My multifaceted revelation, the Church will not fully develop, because I am the life and vision of the Body. When the church rejects the prophets it will be deficient in council, spiritually weak, and unstable. I am here to rebuild My Body. I am here to strengthen them, and to impart vision into this generation. Without vision, My church is barren and fearful, and without vision My people lose hope and they are not grounded in faith. It is time to believe again.”

“I am releasing fresh vision, and strategic wisdom through My prophets in this hour, and as they are properly cared for and embraced, you will glean all of My truths that I have placed within them that you will need in this generation. No longer shall your generation prefer one prophet over another, thinking that one is better than another, or is more gifted than the other. But you will learn to receive them as you would receive Me, and when you do, you will receive all of Me that I have for you. I will release the deep wells that flow within them, and they shall release hope and peace to this generation.”

Then the Lord let go of the basket, and He stood back. He smiled at me and pointed towards me to turn around. So I turned around, and there were multitudes of people behind me. They were all standing in groups as far as the eye could see. They were all waiting and were watching the Lord and me. The Lord said, “Go and give some of the eggs to each group.”

So I turned and walked towards a group nearest to me, and they all reached out their hands, and I placed some eggs in the people hands.

I went to the next group and did the same thing. I did this over and over. I looked down into my basket, and there were still the same amount of eggs. The basket would multiply every time I gave some eggs to the various groups. I then began to go to the other groups and gave each group some eggs. They received them carefully and gladly.

Some groups began to shout when they received their eggs, and they all began to run.

Some groups began to cry and then they began to change before my eyes.

Some groups began to laugh and to break out and dance.

Then, I came to a group and they received some eggs and then suddenly I saw them all catch fire and shoot straight up into the sky. They disappeared from my view, and I wondered where they went.

The Lord came up to me then and said, “I want you to understand what these things mean. The group that you just saw fly upwards are those who received the prophets, and mentored them, and they also learned from them, and because of this it released them to all ascend into the higher realms that I have for them to walk in.”

“The groups that you saw that shouted when they received their eggs were the ones who recognized the truths that I had placed within My prophets, because of this they began to walk in wisdom, great liberty, and overcame the enemy and triumphed with My zeal.”

“The groups that you saw crying and changing as you watched them, are the ones who were brought into deep levels of freedom, healing, and complete restoration, through embracing Me within My prophets. They shall restore much wholeness to My Body in the years ahead.”

“The ones that laughed and danced were the ones that will fight in the great battles ahead, because they received My prophets, they have been strengthened in their various positions, and have developed strategy, and have great courage.”

“These are the Days of My Eagles, My Lions, and My Doves. I am showing you revelations of those I am releasing at this time, so My Body can grow up quickly and be grounded in Stability and Peace. As each part of My Body is built up and then matured, then all of the things that I have for your generation to accomplish can be activated, and entrusted to her. Unless My Body begins to receive every part of My Body, she will not be ready for the years ahead of her. It is time for the acceptance and the installation of all of the parts of My Body. Tend to My Prophets, and you all shall do well, and you shall prosper in the things that you all shall do, they are My gifts to you.”

2 Chronicles 20:20 And they rose early in the morning and went out into the Wilderness of Tekoa; and as they went out, Jehoshaphat stood and said, Hear me, O Judah, and you inhabitants of Jerusalem! Believe in the Lord your God and you shall be established; believe and remain steadfast to His prophets and you shall prosper.

Then the vision was gone.

Posted by revsusanthebrave at 6:13 PM 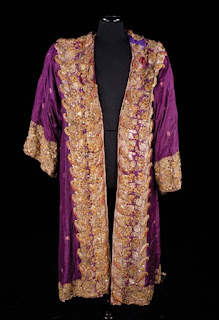 Vision that I had yesterday in the service.......those who have been made ready are receiving the new garments for their specific office and function. A fresh consecration and purification is happening right now for your next commission. Not only are you in a new door, on a new floor, but you are also going to function in your various duties as you allow the robing and the Lord's establishing phase to fully unroll. Patience in the process is mandatory. You are being made ready and complete, so you can take your new seat!
As Pat was talking in the pulpit, I saw a garment- like a robe- descend in the air. It was made of a purple cloth, and it had golden braided edges all around the neck area, and the wrist area. Attached to the golden braided edges were golden tassels. Many golden tassels hung from the gold braids that lined the garment.
Then as I watched the garment, I saw it then change. It now changed into a golden garment, with purple braided edging on the neck and wrist, and purple tassels hung on them. The garment then glowed with a holy brilliance.
Then the garment went into the air, and it went to people I saw in the vision. It hovered over them and it changed back and forth between the two robes, and whatever garment the person was to receive went into them. Some people received the purple garment with gold braiding and tassels. Some of the people got the golden garment with purple braiding and purple tassels.
Purple robe: Kingly Garment
Mark 15:16-17 The soldiers led Him away into the palace that is, the Praetorium, and they called together the entire Roman battalion of 600 soldiers. They dressed Him up in a ranking Roman officer’s robe of purple, and after twisting together a crown of thorns, they placed it on Him;
Golden robe: Priestly Garment
Judges 8:27 Gideon made all the golden earrings into an ephod a sacred, high priest’s garment, and put it in his city of Ophrah, and all Israel worshiped it as an idol there, and it became a trap for Gideon and his household.
Revelation 1:12-13 Then I turned to see the voice that was speaking with me. And after turning I saw seven golden lampstands; and in the midst of the lampstands I saw someone like the Son of Man, dressed in a robe reaching to His feet, and with a golden sash wrapped around His chest.
The making of the Kings and Priests: (The Joseph's and the Daniel's)
Revelation 1:5-6 and from Jesus Christ, the faithful and trustworthy Witness, the Firstborn of the dead, and the Ruler of the kings of the earth. To Him who always loves us and who has once for all freed us or washed us from our sins by His own blood His sacrificial death— and formed us into a kingdom as His subjects, priests to His God and Father—to Him be the glory and the power and the majesty and the dominion forever and ever. Amen.
Revelation 5:10 “You have made them to be a kingdom of royal subjects and priests to our God; and they will reign on the earth.”
Zechariah 3:3-7 Now Joshua was clothed with filthy nauseatingly vile garments and was standing before the Angel of the Lord. He spoke to those who stood before Him, saying, “Remove the filthy garments from him.” And He said to Joshua, “See, I have caused your wickedness to be taken away from you, and I will clothe and beautify you with rich robes of forgiveness.” And I Zechariah said, “Let them put a clean turban on his head.” So they put a clean turban on his head and clothed him with rich garments. And the Angel of the Lord stood by. And the Angel of the Lord solemnly and earnestly admonished Joshua, saying, “Thus says the Lord of hosts, ‘If you will walk in My ways that is, remain faithful and perform My service, then you will also govern My house and have charge of My courts, and I will give you free access to My presence among these who are standing here.
New Garments also give us access to the new levels to walk in and to function within.
- Susan G O'Marra

Posted by revsusanthebrave at 1:20 AM