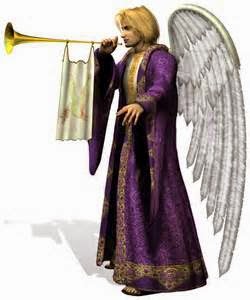 As we drove from our hotel on Wednesday, there was a large angel flying through the area. His lower part of his body was like a mouth of a trumpet, and from the waist up he was a man faced angel. I knew that he was releasing a new prophetic sound throughout the Phoenix area. I asked the Lord what kind of angel he was, and he said, "a Jubilee angel."

When Something is doubled it is established. The double doubled is a 10 fold increase now.

There is an exponential increase of the flood of the knowledge of Him being unveiled.

The Sound of Jubilee:

He is releasing the sound of freedom to those who are bound to now stand on new ground.
He will accelerate the awakening with greater shaking, so He can reveal what He is making.
He is unlocking fresh strategy for war to empower Gods people to advance even more.

It's time for everything that is due to be apprehended and restored by the hand of the Lord.
The Sound of Jubilee is trumpeting for all who can hear what the Spirit is saying at the Head of the New Year!

Jeremiah 32:19-20 great are You in counsel and mighty in deed, whose eyes are open to all the ways of the sons of men, to reward or repay each one according to his ways and according to the fruit of his deeds; who set signs and wonders in the land of Egypt, and even to this day continues to do so both in Israel and among mankind; and You have made a name for Yourself, as at this day.

The Lord and the Breastplate

The Spirit of Counsel:

The Lord came during worship. He was wearing the High Priest garments. His face was radiant and his eyes flashed with fire, and the stones on the breastplate were lighting up as the cries of the nations came up before him. I watched the stones on his breastplate began to resonate in such a way that light and sound began to emanate out of the stones. The desire of the nations shall once again be expressed and shall turn fully to Him.

The ox began to release fire from his mouth which rose upwards and filled the atmosphere.
The eagle began to cry out and Living Lightnings manifested in great lightning storms.
The lion then roared as thunder which rolled outwards in waves and shook everything.
The man reached out his hands and water poured out and it flowed into the nations.

The Great Sword of the Lord

The Great Sword of the Lord then appeared above the whole place. It was flying through the air, shining with His Majesty, but it was also burning with His Jealousy. Each stone upon the handle of the sword was shining with His desire. Lightning also flashed from within the blade of the sword. Everything and everyone came to a hush in the Lords Presence as we all stood before Him.

Jesus’ eyes burned with great swirling fire. He looked out at everyone who stood before him. Light then shone from him through the breastplate that he wore and the light and colors of the stones flashed all around us and through us, as we all stood before him. It looked like a rainbow kaleidoscope of the nations swirling everywhere.

He is awakening men's hearts to their identities, the church to receive His Headship, and nations to their destinies. He is opening up His Greater Purposes now so the nations can realign into them. He is the Lord of all the nations!

Posted by revsusanthebrave at 9:33 PM