The Torch and the Angel named Revolution encounter 12-07-19 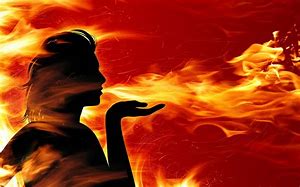 Just wanted to share an encounter that I had in the early hours on 12-7-19 while in a conversation with another friend. The Lord is going to ignite His people in greater ways!The Torch and the Angel named RevolutionI saw this angel walking from a distance and he had a burning torch in his hand. As he got closer to me I could see the torch burning brighter and brighter. He finally stood in front of me and I knew instinctively that the torch was to be put inside of us. Into our hearts. The angel then nodded in agreement and held the torch out towards me. I grabbed the torch that he offered and I shoved it into my heart.Instantly I then saw my heart catch fire and it began to spark inwardly and outwardly much like a sparkler would do on the Fourth of July. There was a diffusion of life that came from the torch that we have not encountered before that will bring such an ignition in the Body of Christ that sparks from the Lords heart will burst outwardly from our hearts.The angel said his name was "Revolution."There shall be a new birthing of the knowledge of Gods love and His life that will usher in a revolution and a fresh manifestation of the living Christ in and through His People that will shake everything around them, and cause the knowledge of God to spark forth everywhere. The fires of God are about to break forth everywhere.A Revolution that sparks and ignites Reformation that builds His Habitation. It begins inside of us, and the spreads across the earth. Prepare yourselves for a great fiery birth!Scriptures:
​Isaiah 62:1 For Zion’s sake will I [Isaiah] not hold my peace, and for Jerusalem’s sake I will not rest until her imputed righteousness and vindication go forth as brightness, and her salvation radiates as does a burning torch.1 Chronicles 28:9 And you, Solomon my son, know the God of your father [have personal knowledge of Him, be acquainted with, and understand Him; appreciate, heed, and cherish Him] and serve Him with a blameless heart and a willing mind. For the Lord searches all hearts and minds and understands all the wanderings of the thoughts. If you seek Him [inquiring for and of Him and requiring Him as your first and vital necessity] you will find Him; but if you forsake Him, He will cast you off forever!John 5:35 John was the lamp (torch) that kept on burning and shining [to show you the way], and you were willing for a while to delight (sun) yourselves in his light.Luke 24:32 And they said to one another, Were not our hearts greatly moved and burning within us while He was talking with us on the road and as He opened and explained to us [the sense of] the Scriptures?1 Corinthians 1:9 [So] that in Him in every respect you were enriched, in full power and readiness of speech [to speak of your faith] and complete knowledge and illumination [to give you full insight into its meaning]."Revolution"The definitions of Revolution as taken from Dictionary.com:noun1. an overthrow or repudiation and the thorough replacement of an established government or political system by the people governed.Sociology.1. a radical and pervasive change in society and the social structure, especially one made suddenly and often accompanied by violence.Compare social evolution.2. a sudden, complete or marked change in something:the present revolution in church architecture.3. a procedure or course, as if in a circuit, back to a starting point.4. a single turn of this kind.Mechanics.1. a turning round or rotating, as on an axis.2. a moving in a circular or curving course, as about a central point.3. a single cycle in such a course.Astronomy. (not in technical use) rotation(def 2).1. the orbiting of one heavenly body around another.2. a single course of such movement.3. a round or cycle of events in time or a recurring period of time.Geology.1. a time of worldwide orogeny and mountain-building.The Mountain of the Lord:The Mountain of the Lord is now being built all over the earth, within His people. He is building His Habitations. He is lighting a deeper fire that will never be put out, but it will get brighter and brighter and spread everywhere with the knowledge of Him!Proverbs 13:9 The light of the [uncompromisingly] righteous [is within him—it grows brighter and] rejoices, but the lamp of the wicked [furnishes only a derived, temporary light and] shall be put out shortly.Proverbs 4:18 But the path of the [uncompromisingly] just and righteous is like the light of dawn, that shines more and more (brighter and clearer) until [it reaches its full strength and glory in] the perfect day [to be prepared].Its time to burn with the knowledge of Him who dwells within!- Susan G OMarra- 12-07-19
​
Posted by revsusanthebrave at 5:04 PM